skip to main | skip to sidebar

Bon Voyage, Turdblossom (just kidding): Good luck to Ridor on his trip to the NAD conference.

Some have criticised me on my friendship with Ridor. I don't really understand why. Here is an individual with quite a sense of wanting to cherish the Deaf community - all of us. I understand he's got a history: so does Rita Skeeter. But Rita used her powers for good in the end! So there's hope. (Ridor, your drag name is staring you in the face.)

Plus... does anyone see how cool this is? We have a group of Deaf people now who blog about news, regularly. As a writer I'm not gonna discourage that... and I hope a lot of Deaf people see Ricky's website and start their own to bring their voices into the picture and help people get over their Fear of English (or hell, start ASL blogs like Joey's.) Now THAT would be an example of the power of Deafhood.

In more interesting news. My foot is swollen with a rather stupid infection, so Erfo, former Foot Infection Victim, has provided bathing advice. I go to soak (I think I look ridiculous.)

A Tropical Depression may be forming off the coast of North Carolina. It seems a bit high up for a TD to be forming. There's one already on the way to hit Asia. So the storm season is well begun, after TS Alberto recently.

THE RAPE OF DEAF PEOPLE: Rape is an expression of power from one person over another, usually formed sexually (but not basically different from one formed, say, from less nuanced violence, like a bat over the head.) In my last post I talked about Deaf people's horrifying image of Deaf children getting experimented on. I decided to post a picture from one protest I went to in the UK in Manchester. We were protesting a conference of CI doctors and practicioners, because at this time it was coming out that many Deaf kids were dying after surgery due to complications. In the US they had caught the infection issue, but not everywhere were there stringent medical standards. Our goal was to convince people to at least discuss the option of waiting till some standard of maturity where the kid could participate in the decision-making process, instead of growing up stuck with an option they might not want. Maybe rape is too strong a word. But we are the people who know what it's like; maybe our opinion needs to be listened to. And when the kid doesn't have a choice - what else would you call it? My parents gave me the choice. I said no. I'm not doing too bad, and I'm happy the way I am. I accept others might be happier with implants. I think they would also be happier with the respect of being offered the choice. Otherwise - you know - we really are disabled. 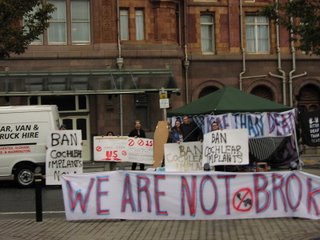 This photo is from the protest. What do you see in the middle? A coffin. That says a lot. A child's coffin; it was so small.

It was an interesting protest. Of course some people got carried away, but it was pretty powerful while it lasted.
Posted by JRS at 8:26 AM

I see nothing wrong with being friends with Ricky. Admittedly he is a character, but how dull would our lives be if we all have ordinary Marys and Joes?

JRS
....WHO ARE YOU? I'm a writer from New York who's been a social worker, actor, dancer, teacher, and lately, a PhD student ....WHAT IS CRITICAL DEAF THEORY? Critical theory encourages us to reflect on and critique society, to look both inwards and outwards. I became interested early on in exploring one aspect of my identity, being Deaf. Thus, I tend to look at the world–both "theirs" and "ours" from a critical perspective. ....WHAT KINDS OF THINGS DO YOU WRITE? For me, writing is something I'm learning to do both in ASL and in English. In the past two years it's mostly been papers and dissertations, with bits of "juicy stuff" trapped within. I write nonfiction about Education and the Deaf Community from a historicist Deaf perspective. I also write fiction... and often it's about Deaf people.