skip to main | skip to sidebar

The following was written in response to a diary by Melvin on DailyKos in which he talks about the disappearance of stars from an ever-more-electrical night sky... kind of turned from a comment into a deaf culture lightview... hope y'all like.

I'm more sensitive to light than most.

Perhaps all Deaf people are; we use light instead of sound for notification, and often our lives can revolve around light, from the first light of the morning which can be either the sun or our alarm clock (or, if we're lucky, the sun and alarm are the same thing;) to the lights which litter our days: the lights of our doorbells and fire alarms and videophones and iPods and Blackberries (which we had back when they were just Wyndtell pagers) and Sidekicks and Treos. Blue and white and green, they illuminate movie theaters as message storms glow and fade when we flock together to see limited showings of good films; some Deaf people complain about the impoliteness of people checking messages during a movie, and they're right: but when the movie starts it looks like a futuristic city underneath me, so part of me grins.

Deaf friends have said they like having the television going on in the background, a visual noise they can pay some attention to which guides the attention they can give.

We communicate by light, in the end. The original telephone was supposed to be a device to "cure" Deaf people; Alexander Bell's mother, a deaf woman, and his wife were his convenient experimental victims. The failure to examine their lives is a failure of Deaf feminism. In comparison the lives of Deaf children in the Paris school have been examined and the torture they underwent written of in the history "When the Mind Hears" by Harlan Lane - yet these two women, who've never been given voice in history, underwent the ministrations of a madman who later proposed the sterilization and isolation of all Deaf individuals and banned the use of sign language as a means of communication - no need to discuss it as an art! Our version came a hundred years later; with TDDs, invented by a Deaf physicist back in the 60's (NOTE TO GALLAUDET: PLEASE CHANGE NAME OF THIS FILE TO SOMETHING OTHER THAN POOO.html) we communicate over telephone lines by various beeps which our machines translate to show letters in green lights almost always dribbling left to right (or in some models, right to left; amazing the importance of these options, in this modern world.) We use the blinking of two small red lights, and their frequency, to ascertain whether the phone is ringing when we call and if the battery is going to conk out just before we give the relay interpreter (who can't seem to understand the concept of chinese food and keeps asking ME, hello, I'm Deaf, how to pronounce General Tso's Chicken) the last bit of our address.

We often startle easily because, although there are plenty of exceptions to this, many Deaf people become quite sensitive to vibration and position and the motion of light. Deaf artists were Leonardo da Vinci's teachers; Deaf mimes were in Chaplin's films and society and I believe he even prized the company a Deaf woman who worked for his family as cook.

Not that her life shouldn't have as much light on it as anyone else's. And he left her, didn't he, when he went to Switzerland, the victim of a cruel McCarthyism.

People like to assume Deaf people can't talk at night, we who use the language of vision and light. Indeed in England, with its clouds of star-defeating London soup, the Deaf became known as the "lamppost people" for quite a long time, since Deaf people of that age and place would circle these circles of light and use British Sign Language to each other (or perhaps what's known as Gay Sign Variant.) But until recently with the invention of this "moon" and these "stars" we signed thick trails of moonlight in the dark, and life was a little more romantic for us, in our own way. The city lights are pretty, don't get me wrong. But electricity has its own color, and it can't stand not being the center of attention. Sometimes the stars in someone's eyes give light enough.

Note: I wrote the Granville Redmond biography up there today, with help from various sources. It's barebones but trying to do more deaf individuals' biographies. Here's a couple paintings by Granville: 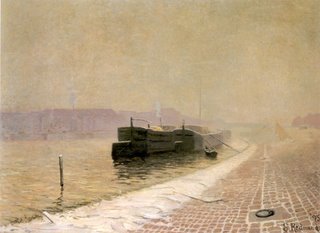 That's the Matin d'Hiver which was accepted at the Paris Salon and currently resides at the California School for the Deaf. 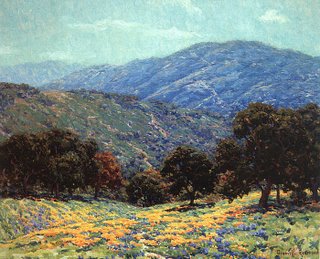 That's another painting of Redmond's entitled Flowers Under the Oaks.

This is fascinating to me. Thanks for the Redmond stuff as well. Got to return here more often.


I really enjoy your perspective over on kos too.
-- melvin

JRS
....WHO ARE YOU? I'm a writer from New York who's been a social worker, actor, dancer, teacher, and lately, a PhD student ....WHAT IS CRITICAL DEAF THEORY? Critical theory encourages us to reflect on and critique society, to look both inwards and outwards. I became interested early on in exploring one aspect of my identity, being Deaf. Thus, I tend to look at the world–both "theirs" and "ours" from a critical perspective. ....WHAT KINDS OF THINGS DO YOU WRITE? For me, writing is something I'm learning to do both in ASL and in English. In the past two years it's mostly been papers and dissertations, with bits of "juicy stuff" trapped within. I write nonfiction about Education and the Deaf Community from a historicist Deaf perspective. I also write fiction... and often it's about Deaf people.